Following on from his A Kiwi Baker in France (2013) series Kiwi Baker Dean Brettschneider continues his food odyssey as he journeys around the West Coast of the United States, discovering some of the best bakeries of Los Angeles and San Francisco.

Traveling through California, Dean will get an insight into the makings of traditional American fare plus he’ll learn a few tricks along the way. While there will be plenty of baking to delight the senses, Dean will also be visiting some of the sights that has put LA and San Francisco on the world stage.
Join Dean as he tastes his way through California, sampling traditional recipes, and is inspired to create a few dishes of his own.
Kiwi Baker in California goes in search of the best baking America has on offer, while Dean embarks on a dream journey that bakers worldwide could only imagine. 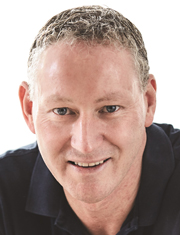