On Saturday 7th June Mary Berry CBE was awarded the Freedom of the City of Bath during the annual mayor making ceremony.

She joined a 250-strong procession of city officials and residents who walked from the Guildhall to Bath Abbey for a service.

Mary was born and raised in Bath and her father Alleyne Berry served as the 724th mayor of the city in 1952 and was involved in establishing the University of Bath.  Her mother Margery was his Mayoress and she continued to attend civic engagements right up until her death three years ago - just before her 106th birthday.

Councillor Cherry Beath, who took office as the 787th Mayor of the City of Bath, said: "Mary exemplifies what can be achieved by a creative spirit, along with talent and determination.

"I am sure everyone admires her culinary works of art, which have inspired the nation to get back to baking so I am proud that my first official duty as the 787th mayor will be to appoint her as an Honorary Freeman of our beautiful city. 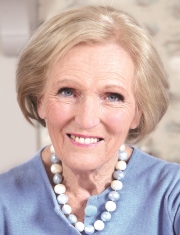