The Bake Off is back...and this year it is joined by An Extra Slice of Bake Off magic in this sister show for BBC Two.

Each week, host Jo Brand is joined by three different celebrity Bake Off fans. Jo shines a spotlight on the good, the bad and the soggy bottomed from the week's episode with chat, unseen footage from the BBC One show and an interview with the week's eliminated baker.

Kicking off the series, Paul Rankin joins Jo and her panel of Bake Off fans discuss the 12 new bakers and their bakes. The theme this week is cakes. What do the panel think of the bakers' Swiss roll? And how did they fare with their first ever technical challenge - Mary Berry's cherry cake? Whose 36 miniature cakes stopped the show? Plus lots of 'exclusive' footage from the tent.

An Extra Slice... when one helping of Bake Off just isn't enough. 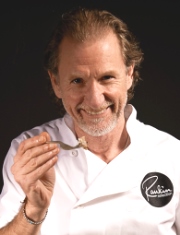