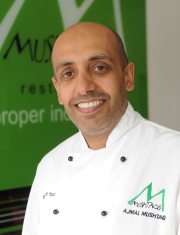 +44(0)20 7384 9955
Ajmal Mushtaq is the UK's leading authority on the Takeaway Sector.  He writes for many leading trade magazines and is regularly on TV for his expert views. He is a Business Expert and Chef Director of the critically acclaimed Mushtaqs Restaurant in Hamilton, Scotland.
Mushtaqs is officially the biggest takeaway operation in Britain and was recently featured in BBC2's Best of British Takeaways, as well as on BBC 1, Channel 4 and STV. The multi-award winning business was announced No1 Takeaway in Britain by Just Eat in 2011, and again in 2017 when they were also awarded Best in Britain at British Curry Awards and Asian Food Awards.
Born in Scotland in 1975, Ajmal left behind a successful career as a London based Management Consultant to become a chef. Within three years he was crowned Scotland’s Chef of the Year at the Scottish Curry Awards.  Since then he has won numerous awards for being both a chef and a successful business operator, growing his 36 seater restaurant and takeaway to become the biggest takeaway operation in the UK.
Recently, Ajmal won Chef of the Year at the Food Awards Scotland 2017/18, and Scotland’s Chef of the Year at the Scottish Curry Awards 2017/18.
Ajmal has been keynote speaker at The Restaurant & Takeaway Innovation Expo for 6 consecutive years and hosts a number of high profile awards such as the Scottish Asian Business Awards, and English Asian Business Awards. He is a regular at food festivals in Scotland such as Tesco Taste of Scotland and appearing at BBC Good Food Show Scotland for many years.  A real crowd pleaser, he is adaptable to public and corporate audiences of all sizes.
Previously, he was a management consultant for 10 years at Accenture - the largest Management Consultancy in the world. He was responsible for delivering multi-million pound business improvement projects for FTSE 100 companies. He has three degrees from the University of Glasgow - Law (LLb), Corporate Finance (MFin) and Management Accounting (MAcc).
Ajmal is a family man and has been married to his wife for 13 years, they have a son, Deen, and daughter, Hanna.