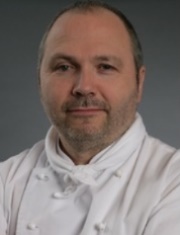 +44(0)20 7384 9955
Paul Gayler MBE is recognised as one of the country’s culinary masters, he is also an accomplished food writer with twenty-one titles to his name and a regular contributor to a host of popular food television programmes.
Paul was 12 when he decided to be a chef and he began in the kitchens of his parents' catering company. At 16, he went to train at the Crillon Hotel in Paris and then returned to London to work at the Dorchester with Anton Mosimann.  This gave him a deep admiration for classical French cuisine and now he describes his cooking as ‘global contemporary’.  In 1982, Paul was appointed head chef at London’s legendary Inigo Jones where he revolutionised the menu.  It was there that he pioneered ‘Vegetarian Haute Cuisine’.
Paul’s impressive culinary background lead to his appointment as Executive Chef at The Lanesborough Hotel London in 1991 until December 2013 when the hotel closed for renovations and Paul moved on to new projects.  He has now set up his own consultancy business called 'Feedback' where he consults on hospitality and food related issues both here and abroad.
His many television appearances include Take Six Cooks, BBC1’s Hot Chefs, Surprise Chefs, Quisine and, HTV’s vegetarian cookery show Green Grow the Dishes. He has been a regular chef on ITV’s This Morning and filmed his own 13 part series for the Carlton Food network, The Green Gourmet.
Paul is an accomplished cookery author and his books include 'Virtually Vegetarian', 'The Gourmet Burger', 'A Passion for Cheese', 'The Ultimate Vegetarian Cookbook', 'A Passion for Vegetables', 'Pure Vegetarian', 'World Breads', the ‘Little Book of…’ series, 'Paul Gayler's Sauce Book', 'Sausages', 'Mediterranean Cook', 'Great Homemade Soups', and the latest book, 'Chicken and Other Birds', published 20th August 2015 by Jacqui Small.
He has received a number of prestigious accolades, including twice winning the Mouton Cadet competition, and is also a two-time finalist of the Prix Culinaire International Pierre Taittinger.  In 2012 he received an MBE for services to the hospitality industry and charities. In November 2012 he was also awarded the prestigious Outstanding Contribution to the Hotel Industry award at the Hotel Cateys.
Gayler is a towering figure in the British food industry, revered as much for his extraordinary culinary talents as for his generous dedication to charitable causes. He helped to establish ‘The Emily Begg Fund’, an organization that raises money for The Teenage Cancer Trust, in remembrance of a family friend.  His own son’s injury while on active service in Afghanistan galvanized him to assemble his own battalion of skilled and famous ‘Chefs For Heroes’ who cater for numerous fundraising events in support of wounded Armed Forces personnel.
Paul's Books

Paul Gaylers Chicken and Other Birds: From the Perfect Roast Chicken to Asian-style Duck Breasts
Chicken and other types of poultry are versatile, readily available, reasonably priced, and packed full of protein, essential nutrients and vitamins. They are also the number one choice for anyone who is watching their fat and calorie intake but doesn’t want to give up meat. This book brings together over 100 main course dishes that employ the whole range of cooking techniques, and that use the ubiquitous chicken as well as all the less well known birds such as turkey, goose, duck, guinea fowl, poussin, pigeon and quail. In addition, Chicken and Other Birds offers a visual tour of the birds, showing their relative sizes and discussing the differences between them, plus a buying guide – what to look for and how much to allow per person – followed by tips on storing and handling uncooked poultry, and step-by-step photos and instructions for preparing a bird before cooking (trussing, French trimming, stuffing and jointing), and for carving or jointing a whole cooked bird. The final chapter, ‘Perfect Sides and Complements’ is a round-up of flavoured butters, marinades, rubs and bastes, stuffings and sauces, chutneys and relishes and, last but not least, the perfect gravy. This beautifully illustrated and comprehensive book is sure to become the classic poultry cookbook that no cook can afford to be without.