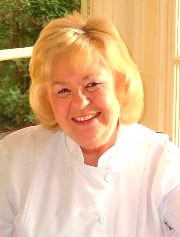 +44(0)20 7384 9955
."Revolutionary cooking!"  - Zoe Williams, Sunday Telegraph
Tessa Bramley, owner and chef of The Old Vicarage restaurant near Sheffield, was awarded a coveted Michelin Star in 1998 and has maintained this great honour every year since then.  She is also a long standing fellow of the "Master Chefs of Great Britain".
After being named ‘Newcomer of the Year’ by The Good Food Guide on opening in 1987, The Old Vicarage under Tessa's guidance has been a fixture in the top 40 restaurants in the UK in the guide ever since.
Tessa’s style is modern and innovative, using unexpected flavour combinations yet with a clear understanding of how to coax every nuance of flavour from the ingredients she uses. She is a country cook, rooted in tradition with a firm grasp of what is seasonal and what tastes right.
She has appeared on television as a presenter on many programmes including regular slots on Channel 4’s daytime series Here’s One I Made Earlier and as a guest judge on BBC’s Masterchef. She also filmed three series for Carlton Food Network: Tessa Bramley's Country Kitchen, Tessa Bramley’s Seasonal Cooking, and Tessa’s Tastebuds.
Tessa has written for publications including Country Kitchen magazine and Antony Worrall Thompson At Home magazine.  She is also a successful author with a string of cookery books over the past 20 years including The Instinctive Cook, Classic Puddings, Harry Ramsden's A Taste of Tradition, Tessa Bramley’s Seasonal Recipes, Casseroles: Comfort Food at its Best, Perfect Puddings, and Divine Dessserts.  She also collaborated on Easy Vegetarian with Fran Warde, and wrote the introduction for Relish Yorkshire – Second Helping by Duncan Peters in 2011.