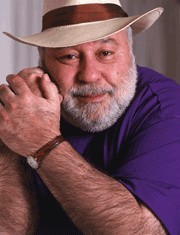 +44(0)20 7384 9955
Health Food Manufacturers’ Association Health Journalist of the Year 2004
Michael Van Straten is a naturopath, acupuncturist and nutritional consultant. He’s also one of the UK’s most respected medical authors, broadcasters and journalists and has written more than 40 books, which have sold over a million copies worldwide.
Widely regarded as a pioneer of modern complementary medicine, Michael has cared for an amazing list of royalty, stage, film and TV Stars; Pop and Classical Musicians, and Sporting personalities from tennis players and Olympic athletes, to racing drivers and footballers.
Michael’s voice is well known from broadcasting with LBC radio every weekend for 30 years, and now broadcasts a regular show in France.  He is a past Governor of the British College of Naturopathy and Osteopathy and has served two terms as President of British Naturopathic and Osteopathic Association.
His accomplishments as an author include the bestselling series of Superfoods health/cook books and he was Consultant Editor to the Reader's Digest reference work Foods That Harm, Foods That Heal. Other books include Foods for Mind and Body, The Family Medicine Chest, a book of home remedies and Organic Living. The Superfoods series include Superherbs, Superboosters, Organic Superfoods, and the very successful Superjuice.
A new edition of Superjuice was published in June 2014, and his latest title Super Soups in January 2015, both published by Mitchell Beazley.
Michael’s website offers a monthly newsletter of health advice, as well as a bank of recipes and other health information:  www.michaelvanstraten.com
Michael Van's Books 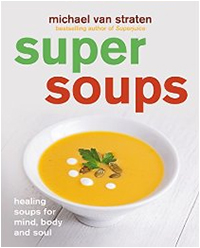 Superjuice
From the bestselling author of Superjuice, Super Soups offers a range of delicious soups to maximize nutrition and boost every aspect of your lifestyle. Heart-warming and health-boosting soups are an effective way of supplying the body's essential everyday nutrients. If you want to improve your mood, lose weight or even spice up your love life, bestselling health expert Michael van Straten makes it easy with a range of revitalizing, quick and delicious soups that will help to cleanse and rejuvenate the mind, body and soul. Super Soups includes recipes to help aid circulation, skin, moods, weight and the immune system. Also included are A-Z charts listing the curative powers of soups for a range of common ailments, so that you can "prescribe" soups tailored to your needs.