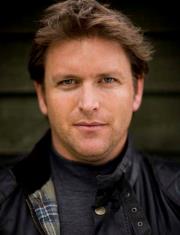 +44(0)20 7384 9955
James Martin made a great impact with his television debut in November ‘96 and has rarely been off screen since. He was a regular chef on Ready Steady Cook (BBC2), and in 2006 reached the semi-finals of Strictly Come Dancing (BBC1). He went on to present BBC1’s hit series Saturday Kitchen for 10 years, regularly attracting viewers in excess of 3.5 million.
In 2008 James featured in The Real Italian Job (BBC2) where he lived his dream of racing in the exclusive Mille Miglia in Italy in a vintage sports car. With over 3.5 million viewers it cemented his reputation as a favourite among car experts and enthusiasts.
He has presented many series for UKTV and BBC; Operation Hospital Food, Operation Meet the Street, The Box, and Home Comforts, as well as being a judge on Junior Bake Off. In 2016 he guest presented ITV’s This Morning, and two-part special ‘James Martin’s Christmas with Friends’ on Food Network UK.
In 2017 James launched new series on ITV; ‘James Martin’s French Adventure’, and ‘Saturday Morning with James Martin’.  In 2018 he presents ‘James Martin’s American Adventure’ and features in ‘Britain’s Favourite Dogs’, both on ITV, and ‘Walks with my Dog’ for Channel 4.
James is the author of 18 popular cook books, picking up many awards along the way, as well as his autobiography ‘Driven’ (Harper Collins).  His latest books both published by Quadrille are ‘James Martin’s French Adventure’ in 2017 and ‘James Martin’s American Adventure in February 2018.
James’ career began at Castle Howard where his father ran the catering and James he often helped out.  He was Student of the Year three years running at Scarborough Technical College, and at the tender age of 22, he opened the Hotel and Bistro du Vin in Winchester as Head Chef, where he changed the menu every day.
For three years James had his restaurant at The Talbot, in Malton, North Yorkshire, where he spent all of his childhood. The restaurant was placed in the Michelin Guide within a year of opening in 2012. James Martin Manchester opened in September 2013 and listed in The Sunday Times Top 100 Restaurants 2015. James Martin Kitchen, opened in 2015 at Stansted Airport leading to further successful openings at Manchester Piccadilly station, Glasgow Airport and Debenhams Lakeside, with more to come from the JMK brand in the near future.  In February 2017 James opened The Kitchen restaurant and cookery school at Chewton Glen in Hampshire.
James received The Craft Guild of Chefs Special Award 2013 for outstanding contribution to the industry, Fortnum & Mason Awards ‘TV Personality of the Year’ 2015, Good Housekeeping Food Awards 2016 ‘Favourite Celebrity Chef’, Great British Food Awards Best British TV Personality 2018, and was inducted into the Guilde Internationale des Fromagers in 2016. His series Food Map of Britain won ‘Best Daytime and Early Peak programme’ at Royal Television Society in 2014, and Saturday Kitchen was TV Choice Awards Best Food Programme 2015, and Good Housekeeping Food Awards 2016 ‘Favourite Cookery Show’ with James as presenter.
A keen journalist, James currently writes a weekly food column in Daily Mail Weekend and previously wrote for BBC Good Food, Sky magazine and weekly car reviews for Mail on Sunday’s Live magazine. He makes regular appearances around the world including BBC Good Food show, Good Food & Wine Show South Africa, and Gourmet Abu Dhabi to name a few. In 2016 he toured the UK with his first show ‘Plates, Mates and Automobiles’ to great success.
In April 2016 James partnered with Asda, and in 2017 became ambassador for Chesneys. He was a consultant on the restaurants and menus for P&O Cruises Ocean Village cruise ships and in March 2015 launched cookery classes on board the new ship ‘Britannia’. He is a consultant for Thomas Cook Airlines, and executive chef to Virgin Trains East Coast.  James’ licensing endeavours include a range of small electricals with Wahl, cookware, knives and kitchen textiles with Stellar/Horwoods, serverware with Denby, and sandwiches with Upper Crust.
James is passionate about celebrating British food, using the best ingredients possible to create simple, delicious recipes accessible to all.  When not pursuing his love of food, James follows his other interests of bikes, planes and automobiles. 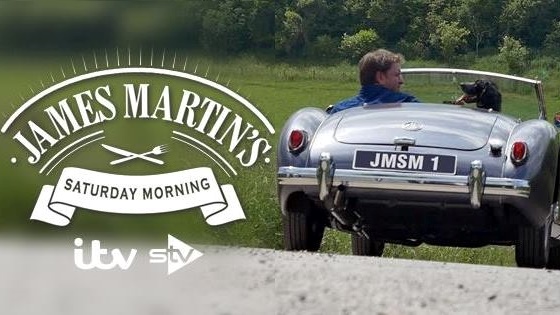 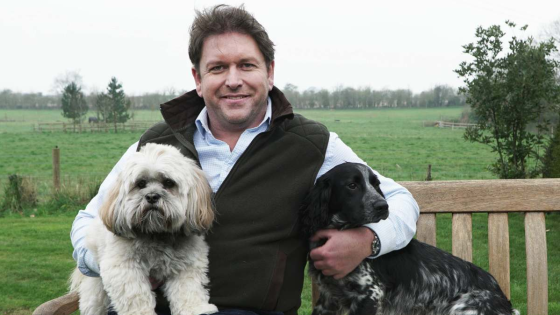 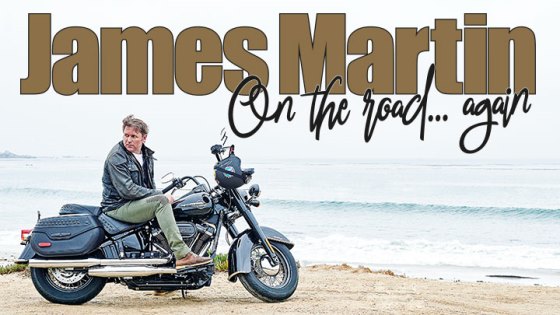 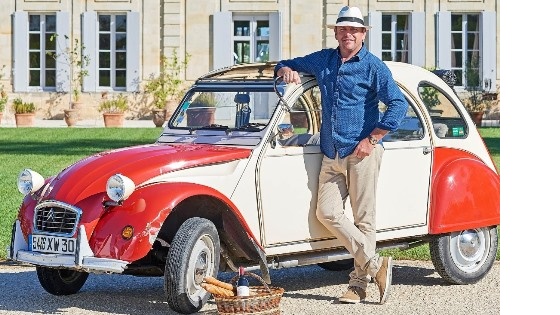 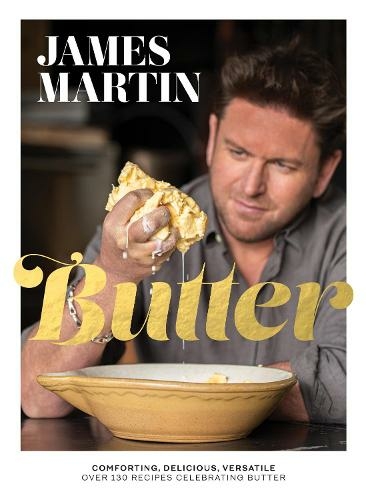 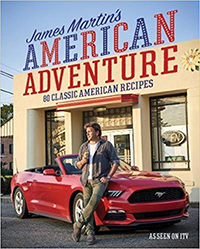 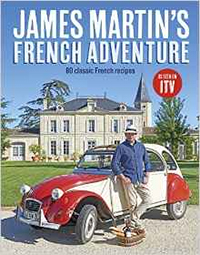 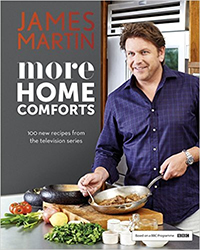 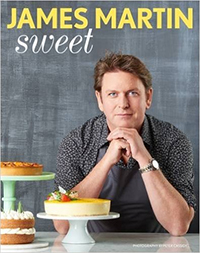 Butter
Winner of the Fortnum & Mason 2021 Personality of the Year Award Butter is the essential book for anyone who loves to cook with this glorious, versatile ingredient. Through over 130 original recipes, James Martin presents some of his favourite new dishes and classics - everything from savoury delights like Butter-poached lobster, French onion soup, Chicken with nduja butter and Dover sole meuniere, to sweet treats including Cinnamon bread with caramel butter dip, Shortbread and Baklava. Butter can bring so much to a plate of food and James showcases this comforting superstar of cooking to its very best. Full-colour photography throughout

The book sees James travel from coast to coast, cooking and eating everywhere from Whitby to Snowdonia, Bristol to Belfast, and Orkney to Padstow. On the way he cooks classic British dishes alongside some more surprising recipes, all with the best ingredients this small island has to offer.

It's the culinary journey that's right on your doorstep and here are recipes from the series, along with exclusive photography from behind the scenes on James's extraordinary food trip.

The book sees James travel from coast to coast, cooking and eating everywhere from San Francisco to Dallas, Philadelphia to New Orleans, New York to Maine, and sampling the high life in The Hamptons. On the way he cooks with real cowboys at a ranch, caters at Reno air race, and explores Creole food in Baton Rouge.

It's the culinary journey of a lifetime and here are all the recipes from the series, along with exclusive photography from behind the scenes on James's extraordinary food trip.

James Martin's French Adventure: 80 Classic French Recipes
James Martin's French Adventure sees the superstar chef journey the length and breadth of the country, sampling the very best food France has to offer. Along the way he cooks seafood in Marseille, shops at colourful Provencal markets, cooks with legendary chefs including Michel Roux and Pierre Gagnaire and explores the vineyards of Burgundy. With 80 recipes for fabulous French classics, as well as James's own takes on the delicious dishes he tastes on the road, you'll be spoilt for choice. Enjoy a warming bowl of vibrant pistou soup on a chilly evening, or take duck rillettes with fig and peach chutney on your next picnic. For a treat, try scallops Saint Jacques with champagne sauce or a classic boeuf bourguignon. And what better end to a meal than a pear and rosemary tarte tatin or a refreshing iced blackberry souffle? Overflowing with stunning photography, James Martin's French Adventure is a must-have for anyone who loves the good life and great, simple food.

More Home Comforts Feb 2016
More Home Comforts introduces 100 new recipes from James Martin, favourites that you will want to cook time and time again.This brand new book features super-fast Instant Comforts, including Pea and Parmesan Soup and Keralan Prawns; Sharing Comforts for when you have a tableful, like Lamb Belly with Barbecue Sauce or Dahl Chicken with Naan Bread; Childhood Comforts such as soothing Fish Pie or Tomato Soup; Posh Comforts for when you're entertaining, with the likes of Carpaccio of Tuna and Perfect Rump Steak; Indulgent Comforts that are naughty but nice (Dark and White Chocolate Cherry Brownies, Churros with Peaches and Custard); and Sweet Comforts, with classic cakes and bakes like Fruit Meringue Gateau and Sticky Toffee Roulade.James guides you through the recipes with their clear, easy-to-follow instructions and beautiful photography. Whether you want a seasonal summer salad or an autumnal roast, here are all the recipes you will need from a master of his trade.

James Martin - Sweet Hardcover – 8 Oct 2015
Bestselling TV chef James Martin returns with a contemporary desserts book, packed with sweet treats. James Martin's Sweet will delight anyone with a passion for the sweet things in life. Martin's hugely popular Desserts (2007) established this much-loved TV chef as the authority on puddings, patisserie and home-baking. This latest collection delivers over 70 fabulous recipes, from simple classics such as French lemon cake, Chocolate tart and Baked apple charlotte to luscious, cream-filled desserts such as Walnut macaroon layer gateau with coffee cream, and sophisticated showstoppers like Raspberry and rose bavarois. Multi-layered recipes such as Mango mousse with coconut foam, Mango sponge, Toasted coconut and Sweet brioche croutons can be deconstructed so that the heart of the dish remains accessible to even the most cautious cook. Whether you're after a simple bake for teatime, or plotting a fabulous finale for a special meal, Sweet provides inspiration in ladlefuls.
James' Videos