+44(0)20 7384 9955
Salvatore Calabrese ‘The Maestro’ is one of the UK’s most celebrated bartenders with a career spanning 40 years.   Serious accolades are given for his world class expertise on vintage Cognacs and his work is constantly profiled in magazines such as Tatler and Decanter.
Having first established himself at London’s Dukes Hotel where he created the recipe for the ultimate Dry Martini, he then moved to The Lanesborough, before opening his own bar ‘Salvatore at FIFTY’ in 2004, and ‘Salvatore at Playboy’ in 2010, both in London’s Mayfair.
He opened Mixology101 in Los Angeles in 2013 followed by ‘Bound by Salvatore’ at The Cromwell Hotel in Las Vegas, which has since won ‘Best Cocktail Menu’ in the USA. In 2015 he launched ‘Salvatore at Maison Eight’ Hong Kong.  Salvatore’s latest venture is The Donovan Bar at Brown’s Hotel in London’s Mayfair, since April 2018.
A best-selling author, Salvatore’s cocktail books have sold in the millions. Titles include Classic After Dinner Drinks, The Complete Home Bartenders’ Guide, Virgin Cocktails, Sexy Cocktails and Cocktails by Flavour.  Revised editions of Classic Cocktails (2015) and The Complete Home Bartender's Guide: Tools, Ingredients, Techniques, & Recipes for the Perfect Drink (May 2019) are published by Sterling for UK and USA.
In the 1980’s Salvatore established himself as a world expert on vintage Cognacs and has spent years finding, collecting and serving some of the world's oldest and rarest vintages. Their dates mark some of history's most important events; his most memorable experience was opening a bottle of 1789 Cognac, the year of the French Revolution. He coined the phrase 'Liquid History' and published Cognac: A Liquid History in 2001.  In 2012 he set the record for the world’s most expensive cocktail, worth £5,500 per glass. ‘Salvatore’s Legacy’ is also the world’s oldest cocktail, containing rare liqueurs with a combined age of 730 years.
Salvatore also has a reputation for non-alcoholic cocktails, having won international competitions in this field, and worked with the Health Education Authority to develop the nutritious ‘Working Cocktail’. He also performed his skills while being driven by Michael Schumacher for a Drink Awareness Campaign by Bacardi!
His TV appearances include How The Other Half Lives, This Morning, GMTV, UK Living, Carlton Food Network, Something for the Weekend, many programmes in the USA, and on radio; Classic FM, BBC Radio2 and 5 Live.
Salvatore is often featured in national press and has written for The Independent, The Guardian and The Times, GQ magazine, and Cheers! with Oz Clarke and Salvatore Calabrese.
He has over 20 awards including 'Salernitani Illustri nel Mondo’ (Italian OBE equivalent), several personality of the year awards, Italian Bartenders Association (AIBES) 'Outstanding Achievement Award’ 2006 and the recognition of his craft with the Maestro d’Arte e Mestiere.  He is a Past President of the UK Bartenders’ Guild and is active within the Industry Internationally, encouraging the next generation of talent.
Salvatore's Books 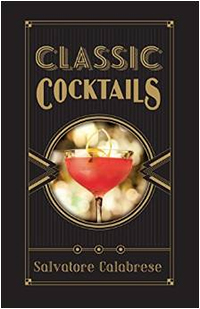 Classic Cocktails
Mixes the classic cocktails while adding the cultural anecdotes and insider tips. This book includes a social history of the cocktail: its origins; great bartenders; bars; and drinkers of cocktails. Recipes, techniques for mixing drinks, and the equipment needed is also included.
Salvatore's Videos