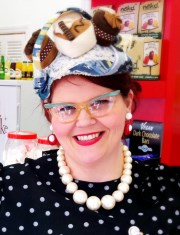 +44(0)20 7384 9955
Mellissa Morgan, aka Ms Cupcake, is a vegan baker and chef who prides herself on her ability to transform basic ingredients into vegetarian and vegan masterpieces. Originally from Canada, she describes her baking as classic North American with a British flavour twist.
Mellissa began baking from home when she couldn’t find indulgent bakery goods for vegans in London.  She soon realised that it wasn’t just vegans she could cater for, but also those with food allergies or religious dietary requirements.  She began to develop gluten free, soya free and even sugar free cakes, and after opening the UK’s first entirely vegan retail bakery in April 2011, she was named the Baking Industry Awards Rising Star of 2011.
In 2015 she secured a deal with Whole Foods Market to stock a range of eight of her cupcake flavours in their UK stores and in 2017 she is expanding the business further with an additional site to support wholesale manufacture.
Mellissa first appeared as an amateur on ITV’s Britain’s Best Dish and has since made appearances on The Alan Titchmarsh Show, Islam TV and Sky News.  As a contestant on the ITV show Britain’s Best Bakery she won a whole new set of fans following praise from the judges for her fantastic tasting vegan cakes.
Her remarkable business journey has brought attention from The Independent, The Economist, and she has appeared on BBC Radio4’s Women’s Hour.  Mellissa was the first European Representative for the Yelp Small Business Advisory Council (YSBAC) where she advised Yelp on the needs of independent businesses in the UK and abroad, and she wrote a regular column for the British Baker Magazine on running a successful small food business.  In 2015 her business was named Dot London Awards’ Best Independent Groceries Retailer.
Mellissa is a passionate speaker and loves to teach others about starting their own businesses when they have little funding or experience.  She has spoken at large corporate events, business conferences, trade fairs and festivals.  She hosts regular classes and workshops to demystify the new business start-up process in her uniquely vivacious style, and pulls no punches to motivate results from her listeners.
A familiar face at Veg Fest in the UK, Mellissa has also appeared at events including The Good Food and Wine Show in Durban, FoodEx Birmingham, The Bakers Fair and many more.
Limited edition Ms Cupcake silicone bakeware retailed in TK Maxx stores to great success in July 2013.
The first Ms Cupcake baking book was published in May 2013 by Square Peg in the UK and is now selling internationally including in South Africa, Germany and France.
Mellissa's Books 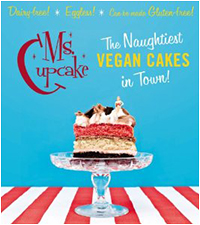 Ms Cupcake: The Naughtiest Vegan Cakes in Town
Ms Cupcake is a glamorous, fifties-styled vegan baker with a cake shop in trendy Brixton market and a bucketful of enthusiasm for delicious and decadent vegan cakes and bakes. Her cupcakes are light as a feather, as sweet and tasty as any you'll eat, with the added benefit that many of them are, or can easily be made, gluten- and wheat-free, so almost anyone can enjoy them. Chapters include cupcakes and muffins, frostings, cookies, tray-bakes and no-bakes, plus an extra-special chapter on deep-fried treats. Ms Cupcake brings her north American influences to the flavourings with peanut butter cookie sandwiches, snickerdoodles and fried cookie dough balls, plus she puts her own twist on British classics like her victoria sponge cake and bakewell tart cupcakes.
Mellissa's Videos