+44(0)20 7384 9955
Clare Ferguson is one of Europe’s top food stylists and culinary advisors and her colourful and gutsy personality ensures she is often in demand as a food columnist, consultant, broadcaster, commentator and guest chef.
She was resident cook on all 78 shows of the Carlton Food Network series What’s Cooking and continues to work as a stylist for many ads and television programmes. She is also a food columnist for Homes and Gardens magazine and has been Food Editor of Elle magazine.
Clare has written and food styled over 20 books including: 'Rice: from Risotto to Sushi', now published in eight languages, 'Flavours of China'; 'Flavours of Italy'; 'Flavours of Mexico', and 'Street Food' (1999) all published by Ryland, Peters and Small. 'Extra Virgin: Cooking with Olive Oil', was published Autumn 2000, and 'Chicken: from Maryland to Kiev', and 'Portable Feasts' in 2001.  'Food for Cooks' (2003), 'Mediterraneo' (2004) and 'Picnics: From Crab and Ginger Wraps to Wild Rice Salad' (2006) and 'Flavours of Provence' (2007).
Clare is a member of the International Association of Culinary Professionals and advisor to leading international supermarkets.  She believes passionately in the enjoyment of eating and the production and preparation of high quality, good looking food and she travels widely in search of new ideas.
She was food consultant/stylist for the BBC series Madhur Jaffrey's Far Eastern Cookery and also for the BBC's runaway success Two Fat Ladies, and a celebrity chef on 78 shows of the Carlton culinary quiz show What's Cooking?  Clare appeared regularly on Carlton Food Network Daily and Granada Sky Broadcasting programmes.
Clare is married and spends her time between London, Greece and New Zealand. She travels extensively in Europe, North America, the Far East and Pacific, both for work and pleasure. She is a member of the Guild of Food Writers (both in the UK and New Zealand), the International Association of Culinary Professionals and is a CCP (Certified Culinary Professional) USA.
Clare's Books 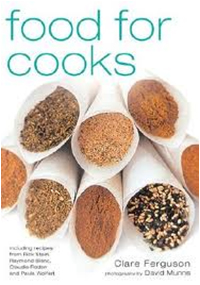 Food For Cooks
The world of food is fascinating but sometimes puzzling. It includes panko, piquillo and paratha; jaggery, jerky and juniper. But what are bottarga and bacalau; achards and annatto? When might soba or somen noodles be better than linguine and lumaconi? Could wood ears work with wild rice? And what on earth is white tea? With new foods from afar in almost every supermarket, today’s cook lives with a truly global pantry. In Food for Cooks, Clare Ferguson describes over 500 ingredients, explaining what to look for in terms of taste, quality and culinary relevance, and identifying the role that many of these storecupboard ingredients play in different cuisines. She demystifies esoteric ingredients and gives useful tips about their use. Clare’s expert advice on preparation is backed up with imaginative and mouth-watering serving ideas as well as useful information on storage times and methods. Key cooking techniques are illustrated in step-by-step photographs, and a list of specialist retailers, such as delis and ethnic supermarkets, as well as mail-order suppliers, is also included. The book features 70 simple and beautifully photographed recipes, from salt-crusted sea bass to steamed ginger puddings, which demonstrate ways of using the ingredients that Clare celebrates. These mouth-watering recipes include over a dozen contributed by well-known chefs, food writers and restaurateurs. Food for Cooks is an essential kitchen handbook that no cook should be without – a virtual world of ingredients at your fingertips.