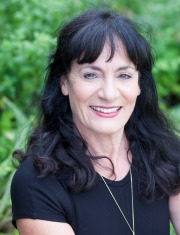 +44(0)20 7384 9955
Ursula Ferrigno is an acclaimed food writer and chef who embodies the Italian and Mediterranean passion for good food made from the freshest natural ingredients.  She specialises in Italian, vegetarian, baking, and gluten-free recipes.
Ursula trained at the Auguste Escoffier School of the Culinary Arts and has herself taught at leading cookery schools in both the UK and Italy, including Leith's School of Food and Wine, Divertimenti and La Cucina Caldesi.  She has also toured the United States, running classes in all Sur la Table stores.
She toured the United States, running classes in all Sur la Table stores, has been consultant chef to the popular Caffè Nero chain for over 15 years and is a regular guest chef at RSJ restaurant in London.
Having been raised with bread on the table at every meal, Ursula is a passionate baker.  With Italian breads her speciality, she teaches both professionals and amateurs to make an array of national and regional breads from Ciabatta and Focaccia to volcanic Stromboli. She is the driving force behind National Breadmaking Week.
She has appeared on many television programmes including Good Food Live, BBC Radio 4's The Food Programme, GMTV's Saturday Disney, Granada TV, and BBC North and has been profiled in a number of magazines.  Ursula presented three programmes for HTV's cookery series Green Grow the Dishes. More recently, in 2013 she was a judge on Royal Chef, a new cookery series for Israeli television.
A prolific author of more than 18 books, Ursula has also written for various publications, including Olive, BBC Good Food, The Observer and Taste Italia.  Her books include: 'Trattoria', 'La Dolce Vita', 'The New Family Bread Book', 'Ursula Ferrigno's Italian Cookery Course', 'A Gourmet Guide to Oil and Vinegar', and 'Flavours of Sicily' published in 2016.
Ursula's latest title is 'Lemons and Limes', published by Ryland Peters and Small, April 2017.
Ursula's Books 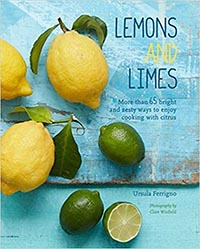 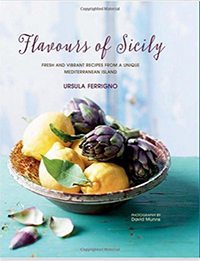 Lemons and Limes: 75 bright and zesty ways to enjoy cooking with citrus
A glorious selection of dishes that all celebrate the unique sharp and aromatic burst of lemons and limes. From fresh seafood to luxurious pasta and heavenly desserts—these citrus fruits can make your food sing.

A squeeze of lemon can bring a dull sauce or lacklustre soup to life as its tartness cuts through and brings out flavor in a subtler (and healthier) way than salt. Smaller, sharper but more intensely fragrant than lemons, limes work with exotic, spicy flavors. Some dishes call for the sharp lift of lemon, at other times the richer fragrance of lime is more appropriate. They are both perfect as an antidote to the heat of fresh chile or pungent garlic, the best friend of herbs and olive oil, roasting meat, and freshly grilled seafood. Their brightness is also perfect in sweet, buttery desserts. Try Small Bites such as Lemon, Mushroom and Tarragon Arancini or Salmon and Kaffir Lime Fishcakes. Make the most delicious Soups and Salads with a Summer Grain Salad or Pork Dumplings in Lime-leaf Broth. Fish and Seafood offers delights like Grilled Lemon Seabass with Roasted Bell Pepper and Basil Butter. Meat and Poultry is full of hearty yet summery dishes like Spiced Roasted Chicken with Chickpeas, Carrots and Preserved Lemon. In Vegetables and Sides find Oven Baked Lemon Fennel or Lime and Chile Sweet Potatoes. In the Sweets and Drinks chapter try a Gin and Tonic Cake or a Mint and Lime Granita. Lastly, in the Sauces and Preserves section learn how to make your own Preserved Lemons and Limes, Hollandaise Sauce, and Lime Pickle. Essays also investigate the history and culture of lemons and limes, their health benefits, and how to grow your own

Discover the unique fusion of flavours that Sicilian food has to offer and bring some Mediterranean sunshine into your own kitchen with Ursula Ferrigno's warm and enthusiastic company.

Sicily is an intriguing place. It is a beguiling place and its prominent position has led to repeated conquests over the centuries, which has left an extraordinary cultural legacy and a reputation as the melting pot of the Mediterranean. It has one of the world s best cuisines thanks to the complex influences left behind by the Greeks, Romans, Arabs, Normans and Spanish who have each occupied this fertile land.