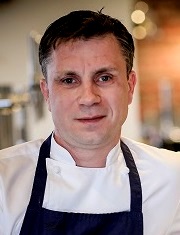 +44(0)20 7384 9955
Chris Tanner began his career in food at the tender age of twelve, by working in the kitchen of a local restaurant. After leaving school he studied for his City and Guilds in catering at West Kent College, where he won the Outstanding Student Award.
He worked at the Brands Hatch hotel in Kent for a year before a chance introduction to the Roux Brothers brought him to Le Gavroche as Commis Chef in 1989. He spent five years working for the Roux brothers in various establishments throughout the world, including The Point resort, Hotel Diva in France, finally becoming Sous Chef at Le Poulbot in London.  Chris was Head Chef at Greenhills Hotel in Jersey, and in 1995 he was given the chance to open from scratch the Kitley Hotel in Yealmpton, Devon, where he achieved 3 AA Rosettes.
In late 2005 Chris went to Montreux in Switzerland as the UK judge in the Apprentice of Europe Competition. This annual internationally recognised competition is organised by the Maitres Cuisiniers De France who promote standards and respect in the restaurant industry across Europe.
In 1999, with his brother James, Chris opened Tanners Restaurant in Plymouth. It was voted as the Best Restaurant in the UK for 2007/8 in the AA Awards and continued to be hugely successful until the brothers decided to sell it in 2014 to focus on their other businesses.  They now have The Barbican Kitchen in Plymouth which they opened in 2006, The Catch in Looe – winner of Best Newcomer in the National Fish and Chip Awards 2016, and their latest venture The Kentish Hare in Bidborough, Kent, opened in May 2014 and within 8 months was listed in the Michelin pub guide, awarded 2 AA rosettes, and won the Top 50 Gastropub Awards ‘One to Watch’ award in 2015, and Newcomer of the Year in 2016.
Chris' television career began in 2001 when he and James made their first TV appearance on Carlton TV's
Food Network Daily. Then in October 2002, they entered UK Food's ‘Chef Star’ competition, coming second.  He has since appeared on Good Food Live and Chris and James’ own 15 part TV series ‘The Tanner Brothers’, broadcast on the Carlton South West, and Good Food Live.
The Tanners have published two books together, ‘For Chocolate Lovers’, and ‘Ice Cream’ (Small Book of Good Taste).
Chris' Books 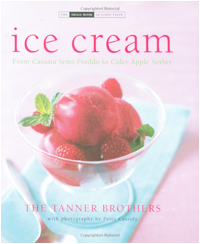 Ice Cream
With a history spanning 200 years, ice cream has, over time, developed from its original recipe of ice mixed with fruit into the popular and beloved dessert we know today.In "Ice Cream", the Tanner Brothers have compiled a stunning array of recipes, updating the traditional ice cream concept and adding their own unique twist.