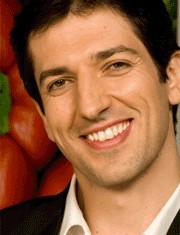 +44(0)20 7384 9955
Felix Economakis is a highly experienced chartered psychologist, clinical hypnotherapist and master NLP practitioner. He is known to BBC3 viewers as the psychologist on The Panic Room and Freaky Eaters, where he used hypnotherapy and more traditional psychological approaches to cure people of their phobias and food problems.
Felix graduated as a Chartered Counselling Psychologist in 2002 whilst concurrently training in clinical hypnosis and Neurolinguistic Programming. His particular interest is in researching and integrating the many different therapeutic approaches he has trained in to produce rapid and powerful interventions, and as such he has successfully treated hundreds of clients who have not benefited from previous conventional therapies.
Felix worked in the NHS for over six years, and now has his own full-time private practice as director of The Heath Therapies in London.
Felix regularly appears on TV and radio to offer his expert opinion.  His most recent work has been on Britain’s Biggest Hoarders for BBC1, Squeamish for Nat Geo, BBC Breakfast, The Alan Titchmarsh Show, Blue Peter, Sky, Newsnight, and BBC London radio as well as offerings in numerous publications such as OK!, The Sun and Huffington Post.
His first book 'Take Charge of Your Life With NLP' was published by Vermilion in 2011, and the latest book, 'Harden Up!: How to be resilient, stop taking things personally and get what you want in life', was published on 1st May 2013 by New Holland.
Felix's Books 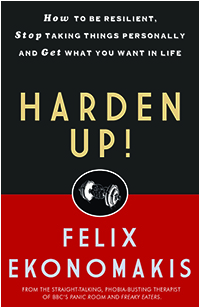 Harden Up!
Felix Economakis explains how previous generations were tougher, harder working and coped better with obstacles, and compares their attitudes with today's overly sensitive, hand-it-to-me-on-a-platter culture. He proposes that to get what we want, we need to take a dose of our grandparents' medicine - and harden up.
Felix's Videos