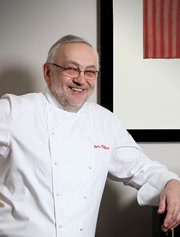 +44(0)20 7384 9955
"Koffmann occupies a unique position among chefs in this country.  He is the chef of chefs, the chef all other chefs look up to" - Matthew Fort, Guardian Weekend
Combining a rustic gutsiness with haute cuisine, Pierre Koffmann knows how to combine tastes and flavours like no one else.  He cooks the kind of food he likes to eat; the food of the French countryside and of his grandparent’s farmhouse kitchen in rural Gascony.
Pierre’s cookery books include Memories of Gascony (new edition June 2016; Mitchell Beazley), and La Tante Claire: Recipes from a Master Chef (Sep 2012; Mitchell Beazley).  Classic Koffmann was published in 2016 by Jacqui Small, and won the 2017 James Beard Foundation Book Award for ‘Cooking from a Professional Point of View’.
He has appeared on numerous television shows, including Masterchef and Masterchef: The Professionals (BBC), Saturday Kitchen (BBC), The Chef’s Protégé (BBC), and as judge in the BBC One daytime show Yes Chef which ran for two series in 2016-2017.
After training in his hometown of Tarbes, southwest France, Pierre worked his way up at restaurants across France and Switzerland, before moving to the UK.  Pierre quickly found himself working as Sous Chef for Michel and Albert Roux at Le Gavroche and within six months he was promoted to Number 2. After a quick stint at Brasserie Benoit in the City, Pierre was appointed Head Chef at the Roux Brothers’ new Waterside Inn at Bray. In his five-year tenure he helped them achieve two Michelin stars.
In 1977, with backing from Michel and Albert Roux, Michael Caine and Professor Von Clan, Pierre opened his first restaurant, La Tante Claire, in Chelsea, achieving his first Michelin star the following year, a second in 1980 and third in 1993.  La Tante Claire moved to The Berkeley in 1998 and continued as one of London’s top restaurants for another five years.  In 2009, Pierre agreed to take a ‘pop-up’ La Tante Claire to be the Restaurant on the Roof at Selfridges for one week. It was such a success it continued for 2 months before Pierre once again returned to The Berkeley Hotel in Knightsbridge and to open Koffmann’s with his wife and business partner Claire for a successful seven years before closing in 2017 for the hotel’s expansion.
In October 2018 he teamed up with fellow three Michelin star chef Marco Pierre White to open an English and French Brasserie, Koffmann & Mr White’s, in Bath.
Pierre has worked as a consultant to many companies, including Waitrose, Sodexho and Company of Cooks for the Royal Opera House, and now has his own product range Koffmann’s Potatoes.
In 2016 Pierre celebrated 50 years in the kitchen, and having trained some of the UK’s top chefs, his protégés have now amassed more than 20 Michelin stars between them.  His career and enormous influence has been recognised with many awards. In addition to Michelin stars, Pierre was awarded five rosettes by the AA Restaurant Guide, 10/10 by the Good Food Guide, and the Ordre du Mérite (Chevalier) – the French equivalent of a Knighthood.  Pierre was presented with the Laurent Perrier Lifetime Achievement Award at Tatler Restaurant Awards 2014, and the AA Lifetime Achievement Award 2016.
Pierre's Books 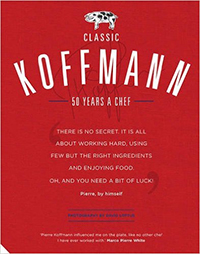 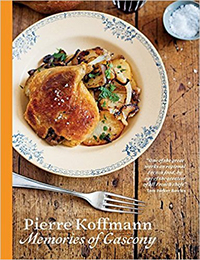 There's no doubt that it's Pierre Koffmann, the three Michelin-starred chef, who is the granddaddy of French cuisine in Britain. Now celebrating 50 years in the business, the self-effacing Pierre has been coaxed out of the kitchen just long enough to write this superlative collection of his classic recipes.

Ranging as you would expect from Entées to Desserts, and everything in between, Classic Koffmann is a worthy successor to Pierre's Memories of Gascony, which earned him the prestigious Glenfiddich Award in 1990. As if its collection of over 100 star recipes from the master chef wasn't enough, Classic Koffmann is also beautifully illustrated with photography by master photographer, David Loftus.

With recipes and reminiscences from his grandparents’ home in rural Gascony, this is an intimate account of school holidays spent on the farm helping his grandfather to harvest and hunt, and learning to treasure seasonality, simplicity and the best ingredients at his grandmother’s side. The finest of Gascony produce is here, with a focus on simplicity.

The recipes stand the test of time and speak to the food tastes and trends of today. While you read the charming stories of everyday life on the farm, you’ll devour the cuisine as you go along – dandelion salad with bacon and poached egg, grilled chicken with shallots and vinaigrette, and greengages in armagnac in Spring; chicken liver pate with capers, Bayonne ham tart with garlic, oeufs a la neige in Summer; roast hare with mustard and beetroot, salt cod cassoulet and quince jelly in Autumn; and fried eggs with foie gras, potato and bacon pie and tarte aux pruneaux in Winter.

This is a book to learn, love and live from.